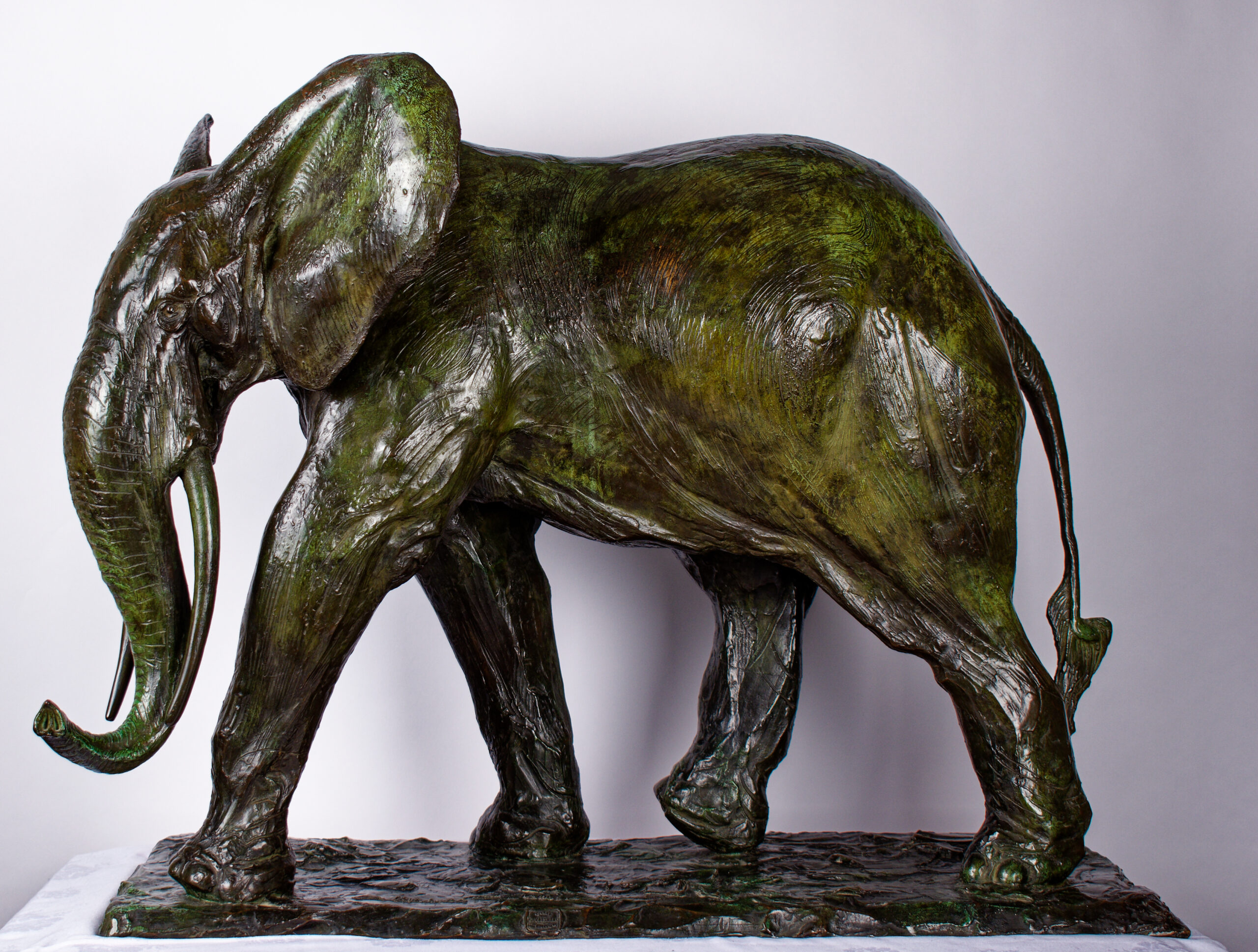 A rare and perfectly preserved early 20th century bronze sculpture of a walking elephant
by the Belgian artist Albéric Collin. The exceptional size (66.5 X 84 X 40 cm) and quality
of this sculpture undoubtedly makes this one of Collin’ most sought-after and important
works. This high quality bronze statue, cast using the lost wax technique by the Valsuani
Foundry, has a subtle patination of mixed shades of green and light and dark brown.
Due to meticulously-kept provenance documentation, it should be noted that this piece is
known to have remained in the same family for four generations since its original
purchase. Artimo is proud to offer to private art collectors for the first time.
After thorough investigation of the Albéric Collin archives, it was discovered that the
artist authorized seven reproductions, of which only two models were produced between
1918 and 1921. Neither have ever been offered for sale since.

The son of a Flemish mother and a father from Liège Albéric Collin (1886 – 1962) was born in Antwerp on 6 April 1886. A talented sculptor, Albéric Collin trained at the Royal Academy of Fine Arts in Antwerp. At the beginning of the 20th century, Antwerp possessed an impressive Zoological Garden, then the largest in Europe, whose wonderful and exotic animals provided a rich source of inspiration to artists. Collin frequented the city’s zoological garden along with artists like Rembrandt Bugatti, brother o the car manufacturer Ettore Bugatti, whom he regarded as his mentor and friend. There, Collin sketched th anatomical features of a range of creatures and studied their behavior and their characters.
From 1920 onwards, Albéric Collin took part in numerous exhibitions in Belgium, France and Spain. In 1922, he was awarded a medal of honour at the Salon des artistes français de Paris for his representation of a dromedary. In 1930, the artist was commissioned to create twelve monumental stone elephants to adorn the Congo Palace at the Universal Exhibition of the Colonies, Navigation and Flemish Arts in Antwerp. Five years later, he installed an enormous concrete elephant ridden by four Congolese in front of the Belgian Congo pavilion for the Brussels World Fair. This work now stands at the entrance to the Tervuren Museum.

The Valsuani foundry :
Before opening his own foundry, Claude Valsuani and his Italian father Marcello worked at the Hébard foundry. In 1899, Claude established the Valsuani Foundry, founded in
Châtillon. In 1908, the Valsuani foundry moved to 74 rue des Plantes in Paris, working with hot patina, Italian core and cow dung pot. His younger brother, Attilio, also set up a foundry, but not until the 1920s in Bagneux.
This foundry was especially renowned for the quality of its lost wax castings. It worked for the greatest artists such as Antoine Bourdelle, Pablo Picasso, François Pompon, Dora Gordine, Charles Despiau, Henri Matisse, Edgar Degas and Arno Breker.