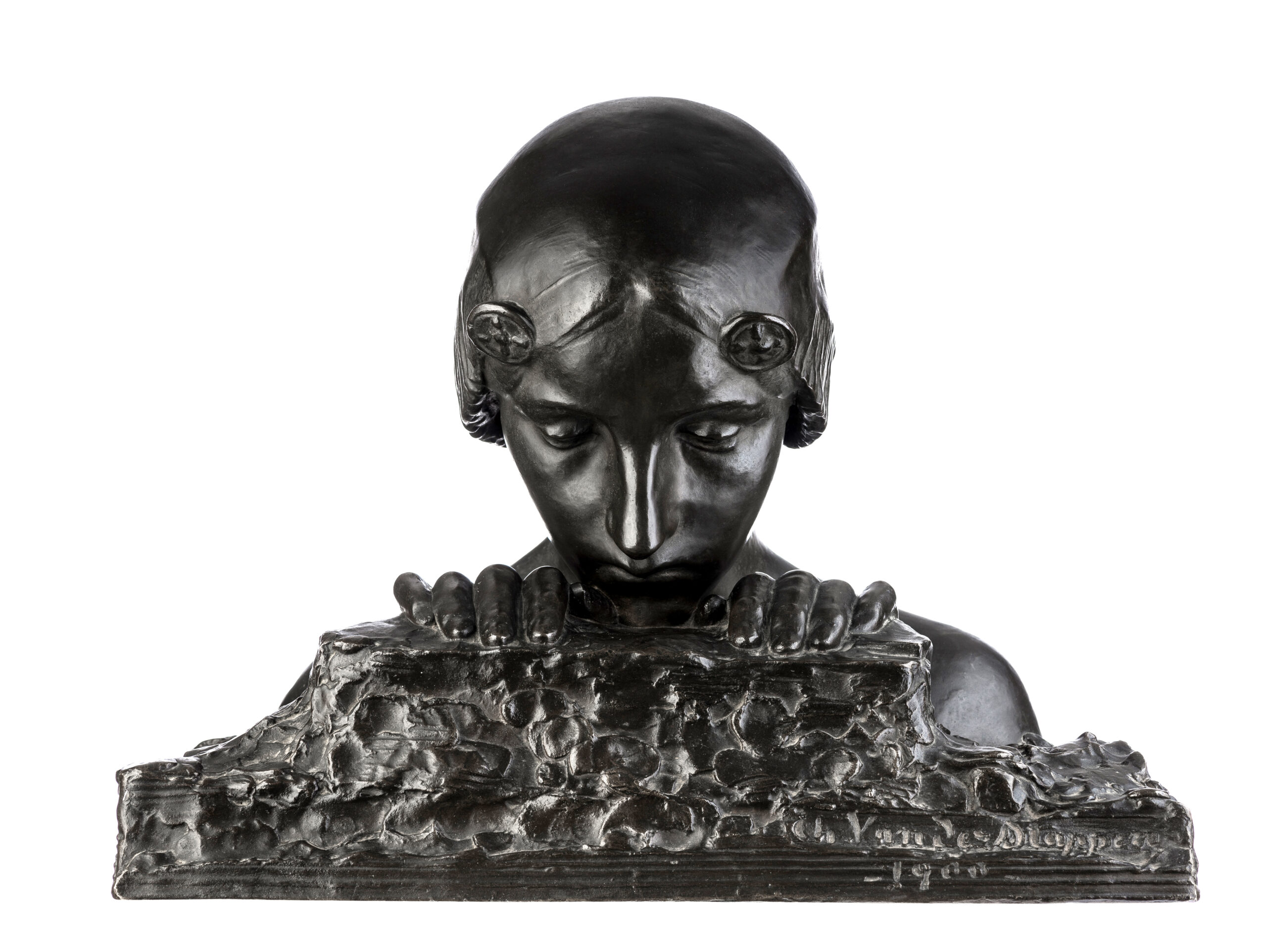 A bronze sculpture by Charles Van Der Stappen representing a woman coming out of the water.

The sculpture by Charles van der Stappen shows a woman coming out of the water, her hands resting on a stone in front of her, her gaze impassive and neutral, her face overhanging the stone and her hands. Its head is covered with a cap equipped on either side with a disc that can be compared to a button. The cap is smooth on top and ribbed at the edges.

This symbolist sculpture leaves room for suggestion, it is free to be interpreted. Some will see it as a nymph of water, others as an opposition between darkness and light.

The sculpture is in bronze made by lost-wax technique and has a dark brown patina.

Charles van der Stappen (1843 – 1910) was forced to earn a living at a very young age. The young man’s artistic talents were revealed very early on and his fierce determination pushed him to try his luck on the hazardous path of art.

At the age of sixteen, working during the day, he entered the Brussels Academy for ten years of evening classes. Among his teachers, Jean Portaels, who will help him to achieve his full potential as an artist and accompany him through his difficult beginnings as a young, unsilvered artist. He graduated from the Academy in 1868 with honours, he was first with great distinction.

Van der Stappen attended during his studies the Portaels workshop, where he worked alongside Meunier and Lemmonier. These meetings, the passionate discussions that accompanied them, the systematic practice of model study, played a major role in the development of his art.

The famous Octave Maus writes of Van der Stappen: « If Van der Stappen’s art embraces the most diverse fields of plastic art, the sculptor’s mind is not foreign to any investigation. He keeps all the curiosities, all the impatience to increase the baggage of his knowledge ». Van der Stappen was a cultured and curious man, interested in music, philosophy and literature. He frequents great artists in order to draw inspiration from them in these works: the writer Camille Lemonnier, the novelist Léon Cladel, the writer and jurisconsult Edmond Picard, the poet Emile Verhaeren, the painter Emile Claus, the sculptor Constantin Meunier, etc. Most of them become close friends.

Van der Stappen began travelling in 1864 to perfect his art. He will go to London, then to Paris where he will follow the courses of the National School of Fine Arts. He will visit as many museums as possible in order to be inspired by the former masters, he will also go to the various salons to learn from his French colleagues. (Carpeaux, Mercié, Rude,…)

From 1871 to 1873 he travelled and stayed in Italy in Florence and then in Naples to learn from the sculptors of the Quattrocento. In 1876, he exhibited at the Cercle artistique de Bruxelles and in La Chrysalide, associations of young artists. From 1876-1879, thanks to his friend and financier Edmond Picard, Van der Stappen moved to Rome. This stay will be prolific for him, he will realize some of his major works such as « The man with the sword », « David » and « You will earn your bread with the sweat of your brow ». He will also learn the lost wax casting technique, a forgotten skill that he will learn at the largest Belgian foundry La Compagnie des bronzes. In 1882 he founded a free studio where he trained a new generation of young artists such as Paul Du Bois, Jules Lagae, Egide Rombaux and Victor Rousseau. This place will become an exceptional art space, a meeting place for leading figures in all forms of art.

From 1883 onwards, the sculptor held a series of exhibitions where he met with great success. He exhibits at the Cercle artistique de Bruxelles, the Exposition de l’ancien atelier de Portaels, the International Exposition of Amsterdam, the Salon de Paris, the exhibitions of the XX then at the Libre Esthétique and aven at the Venice Biennale. The same year Van der Stappen was appointed first professor of sculpture at the Brussels Academy of Fine Arts, replacing Eugène Simonis, who had just died. For 27 years, from 1883 until his death in 1910, Van der Stappen taught in this school, of which he was also the director on two occasions (from 1898 to 1901 and from 1907 to 1910) due to the compulsory alternation since 1895 with the teachers of painting and architecture. The Academy paid tribute to him by organizing a prestigious jubilee on the occasion of his 25 years of teaching in 1908.

In 1884 he exhibited his symbolist-inspired masterpiece, the « Sphinx ». Then, in 1886 he was appointed first professor of decorative sculpture in the new school of Decorative Arts. In this way, he works towards the union of great art and decorative art, a union that he has always defended in his teaching. He and his friend Constantin Meunier received the medal of honour at the Universal Exposition in Paris in 1889. Van der Stappen is gradually evolving towards a certain modernity. In 1894, he became a founding member of L’Art S.A. in favour of decorative art. Van der Stappen will never cease to defend Art in all its forms, he will pronounce an evolution towards the modernity of Art.

In 1897, Charles Van der Stappen is known for his sculptures in which the symbolism of the figures is strongly affirmed as in « The Mysterious Sphinx ». The reference to reality is mixed with the suggestion of the idea. These ideas, this ability to create symbols, Van der Stappen has enriched them through his relationships with some of the greatest artists of his time.

Van der Stappen opens new paths for sculpture by exploring the link between sculpture and utilitarian objects. He joins the research of Art Nouveau artists such as Wolfers or Craco, trying to combine different materials, playing on polychromy. Some of Van der Stappen’s works are well in line with the Art Nouveau movement in Belgium at the end of the century. In addition, his commitment is attested. He is indeed involved in the various avant-garde networks: the XX, the Libre Esthétique or the S.A. L’Art.

The present perfectly symbolist sculpture « The Hidden Treasure » is a perfect example of the culmination of several years of work, reflection and learning in order to favour the suggestion of the idea over the allegory.

Van der Stappen is considered an eclectic sculptor; his work covers different tendencies that are in turn related to neo-Florentine art, naturalism, symbolism or Art Nouveau. He is a sculptor with a great social success and numerous official commissions, as well as professor and then director at the Brussels Academy of Fine Arts, Charles Van der Stappen can be considered as one of the main protagonists of the Brussels artistic and cultural scene at the end of the 19th century. Despite his modest origins, from the 1860s onwards he was able to build a vast circle of friends in the progressive upper middle class, a precious network on which he could count all his life. Van der Stappen was undoubtedly an endearing personality and a loyal friend. His often praised work force and open-mindedness were reinforced by unwavering friendships, which served as a basis for improving, redirecting and consolidating his career.

ALJ Van Aerschodt had a son André-Louis-Charles Van Arschodt with whom he collaborated from 1878 to 1888, sometimes signing « ALJ VAN AERSCHODT & FILIUS CAROLUS ».

Following ALJ’s death in 1888, ALC will not continue the business.

ALJ’s brother, Séverin Van Aerschodt, also having his own foundry, collaborating with his brother in view of the volume of orders, started the art foundry after the Second World War in Leuven. He had three sons, Alphonse in 1869, Félix in 1870 and José in 1875. Séverin ALJ will build an international reputation.

Upon his death in 1885, Félix Van Aerschodt took over his father’s foundry after training with the sculptor Jef Lambeaux, while his brother Alphonse Van Aerschodt specialized in art foundry.

This sculpture has the stamp of the Alphonse Van Aerschodt foundry, the first specialised in art foundry of a great line of bell, chimes and lamp posts foundrymen.