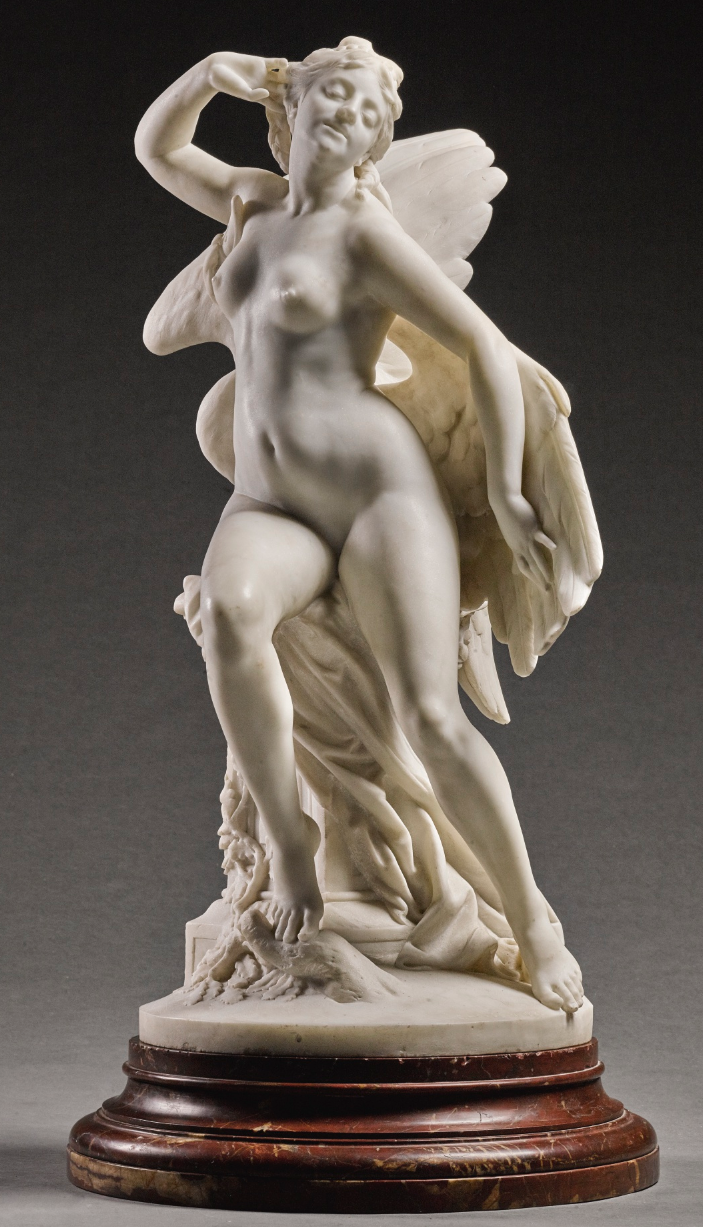 Leda and the Swan by Edouard Houssin

Beautiful marble sculpture representing a famous scene from Greek mythology: Leda and the Swan. This sensuous marble piece showcases the sculptor’s Romantic interpretation of mythological subjects. Leaning back in ecstasy as she feels the soft plumage of the gently advancing swan behind her, Leda appears to willingly surrender to Jupiter’s seduction. 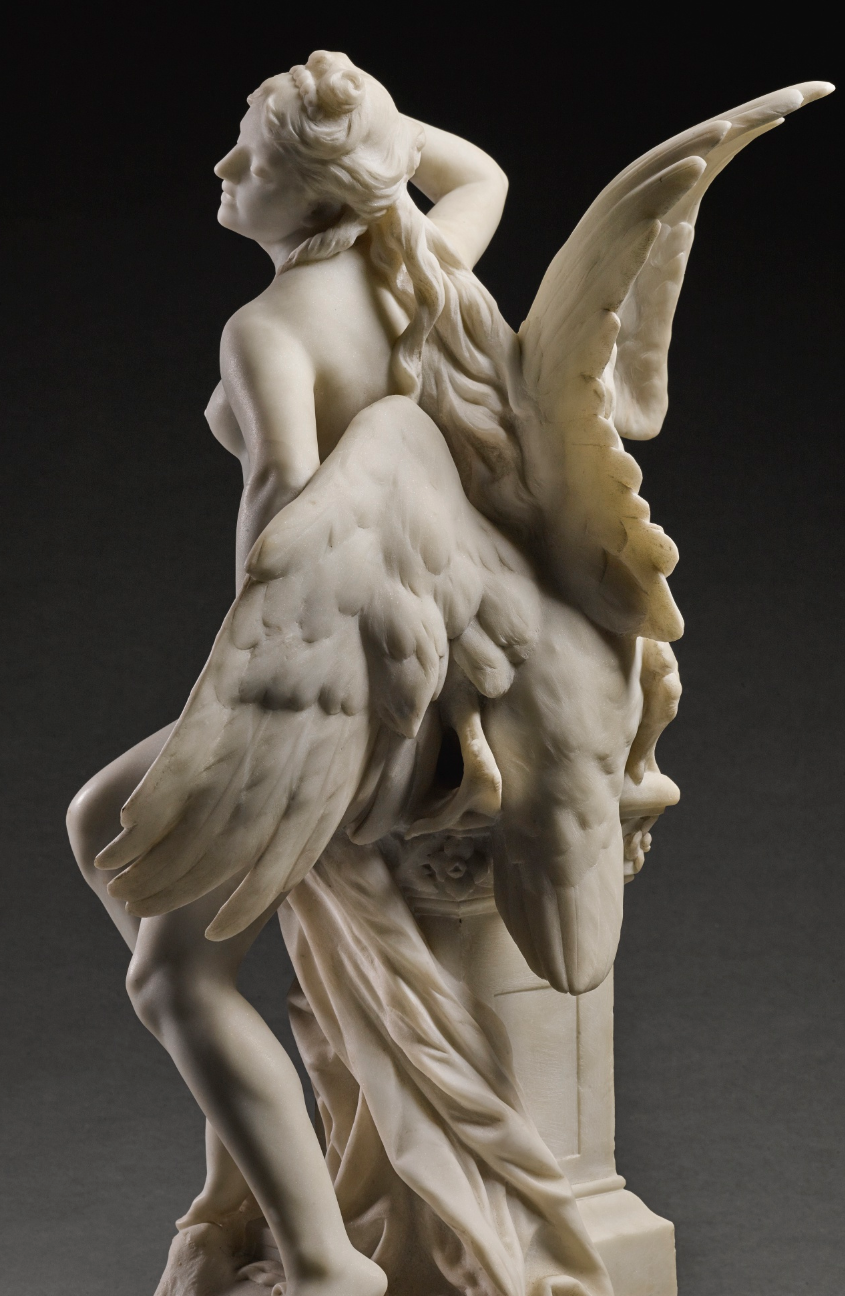 Beautiful marble sculpture representing a famous scene from Greek mythology: Leda and the Swan. This sensuous marble piece showcases the sculptor’s Romantic interpretation of mythological subjects. Leaning back in ecstasy as she feels the soft plumage of the gently advancing swan behind her, Leda appears to willingly surrender to Jupiter’s seduction.

The present sculpture represents the mythological story of Leda, a princess of Sparta who was seduced by Jupiter. In order to approach her, Jupiter transformed into a swan. A beautiful representation of female sensuality, this myth was depicted by some of the greatest artists in history going back as far as Leonardo da Vinci, Michelangelo and Raphael.

Reminding us in some ways of the Dance by Carpeaux, the present composition was inspired by Carpeaux’s Leda with the anatomical curves and the characteristic smile that illuminates the face. The diagonal line crossing Leda’s body creates a dynamic movement typical of Romanticism. The subject of Leda and the Swan is well known in art because it allows a very sensual representation that often pleases the viewer. The plaster model of Houssin’s “Léda” won an award at the Salon des Artistes Français in 1887 and, thanks to its success, was made in marble the following year. It is also without doubt Houssin’s most important surviving sculpture.

The sculpture is signed « E. Houssin 1888 ». Edouard Houssin (1847 – 1917) was born in Douai and attended classes at the Douai Academic Schools in 1856, receiving many awards. In 1864 he moved to Paris where he was admitted to the « Ecole des beaux-arts » in 1866 in the workshops of Henri Lemaire and François Jouffroy.

In 1868, he exhibited for the first time a bust at the « Société des amis des arts de Douai ». From 1871 to 1877, he was appointed professor of sculpture at the Douai Art Schools. In 1873 he began to show his work at the Paris Salon, where he was awarded medals in 1887 and 1889. His commissions were largely centred on his native northern France and included a number of monuments, as well as several figures in the Douai Museum.

At the beginning of 1894, he was appointed professor of modelling at the Manufacture nationale de Sèvres, a position he held until his death in 1919. On January 17, 1894, he participated in the conference followed by a banquet, organized by Charles Bodinier at the Théâtre d’Application, in honour of the poet Marceline Desbordes-Valmore with Paul Verlaine, Émile Gallé, Robert de Montesquiou and other personalities from the arts world. It was during this conference that the idea of a monument to the poetess was launched. He built the Monument to Marceline Desbordes-Valmore, inaugurated on July 13, 1896 in Douai.

Édouard Houssin has carried out numerous public commissions, particularly in northern France. In 1895, Fernand Lefranc wrote in « La Revue du Nord » : « His busts, all of them are of impeccable accuracy and admirably executed». Houssin’s monuments include Child with a panther (1881), Esmeralda (1883) Phaeton (1889), Loïe Fuller (1897), Saint Ignace (Braines) bronze cast by the Denonvilliers art foundry in 1888, the Lifeboat (1904).

He was a talented and well-known artist during his lifetime, but the destruction and theft of nearly 90% of his work during the two great wars made him a relatively unknown artist today. As such, works by this artist are extremely rare and often heavily restored.

Mr Arnaud Debève, in charge of patronage for the Louvre Lens Museum,  wrote the catalogue raisonné of the artist entitled « La Vie et l’Œuvre du sculpteur Édouard Houssin (1847-1919) » published in 2006. This testifies to the importance of the artist and the quality of his work.

Some sculptures of Houssin can be found in museums such as :