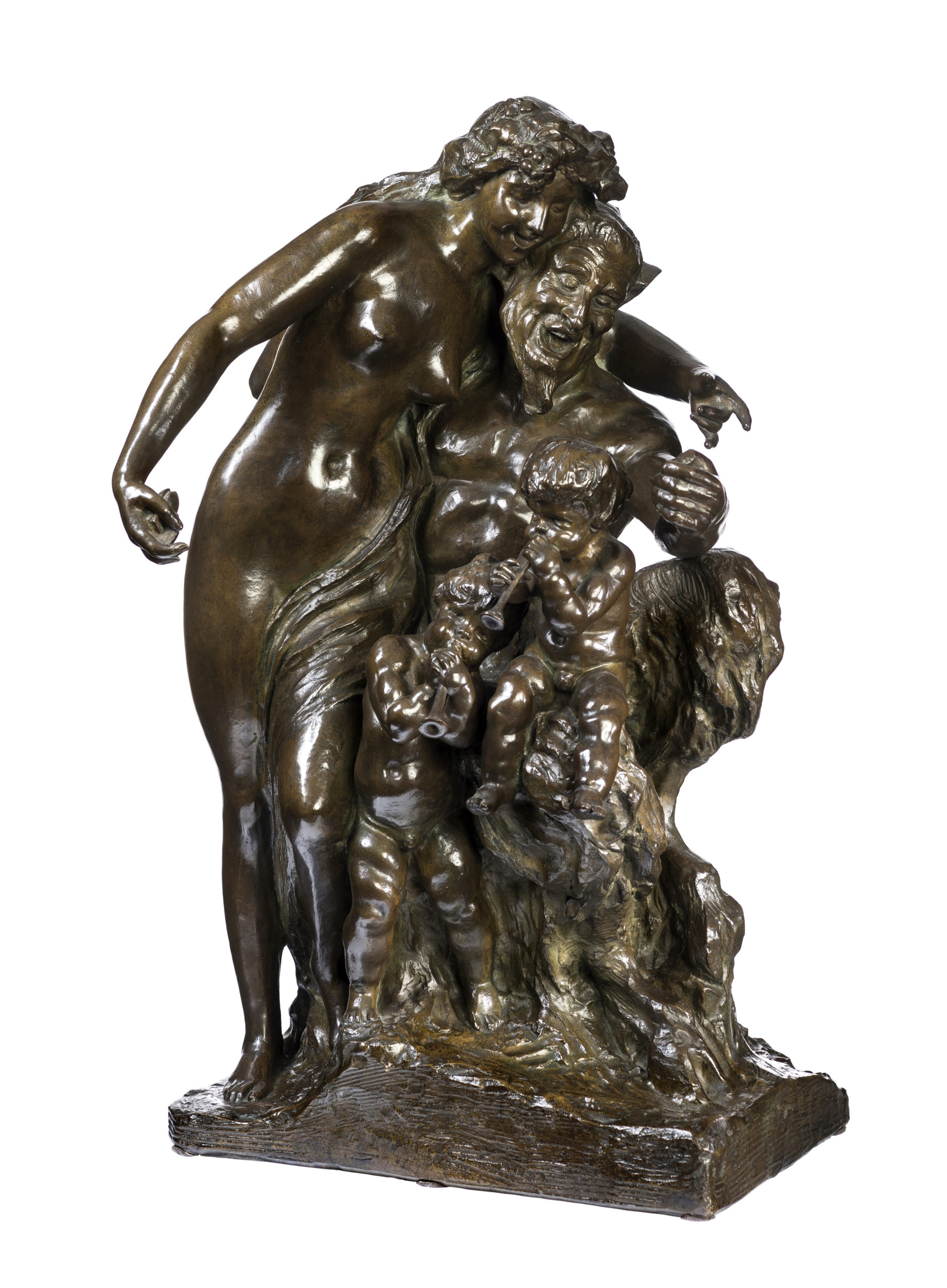 The Mad Song or La Folle Chanson by Jef Lambeaux

The sculpture by Jef Lambeaux is made of light brown patina bronze. It represents a family of fauna playing music.

The sculpture by Jef Lambeaux is made of light brown patina bronze. It represents a family of fauna playing music. The woman plays castanets and the man sings. Their two children play the trumpet sitting on the Satyr’s lap.

Jef Lambeaux (1852 Belgium – 1908) is without a doubt the most remarkable sculptural talent of the second half of the nineteenth century in Belgium. In the face of his opponents, this uncommonly energetic man built up an enormous oeuvre that continues to arouse admiration and amazement. Originality in the broadest sense of the word is the first feature of his practice. His lifestyle also assured him of a unique place in the artistic circles of the vibrant Belgium of the time. The empathetic loner that he was, coupled with undiluted singularity and a generous imagination, clearly distinguish his works from that which his fellow sculptors were producing.

With an enthusiasm reminiscent of Rubens, Jordaens and certainly also Antoine Wiertz (1806-1865), Jef Lambeaux unintentionally produced countless monumental sculptures that provoked a wide range of reactions, on both an aesthetic and an ethical level. His excellent craftsmanship was never questioned. Bravura was never far off in his group scenes that were as dynamic as they were complex, and often larger than life: bronze battle scenes, wrestlers, boxers, heavy-set centaurs, abductions, and so forth. But there were also monumental marble sculptures with titles such as The murderer, Love and drunkenness and of course his magnum opus, an enormous white marble relief (8 x 12 meters!), worthy of Rodin, depicted an unprecedented dramatic spectrum of the Human Passions.

His energetic life that was so much more than just a successful career, not only led to the creation of titanic artworks, but also to multiple representations of light footed young women and expressive busts of characterful men, preferably artists (Jacob Jordaens, Henri De Braekeleer, Frans Lamorinière, Hendrik Conscience,…). Lambeaux’s oeuvre, of which there is still no complete inventory, can be estimated to encompass more than 150 works.

In the Belgian museums – especially those in Brussels and Antwerp – stunning examples of his work can be seen. After his education at the academy and his initial participation in exhibitions the career of this unusually driven artist only reached full speed at the age of thirty, when his now famous sculpture The Kiss was purchased by the Antwerp Museum (1882). Jef Lambeaux was unstoppable in his modeling of sculptures, large and small, commissioned or not. All of his works bear his foremost trademark, that high degree of – often daring – originality. It procured both for his work and personality the unique reputation that came to be this artist’s lot – the stuff of novels! – even during his own lifetime. Little more was needed to ensure this than his spectacular Brabo Fountain (1887), right in front of the city hall of the town of his birth.

The Present sculpture has been exhibited for the first time by Jef Lambeaux at the Salon de Bruxelles in 1884.