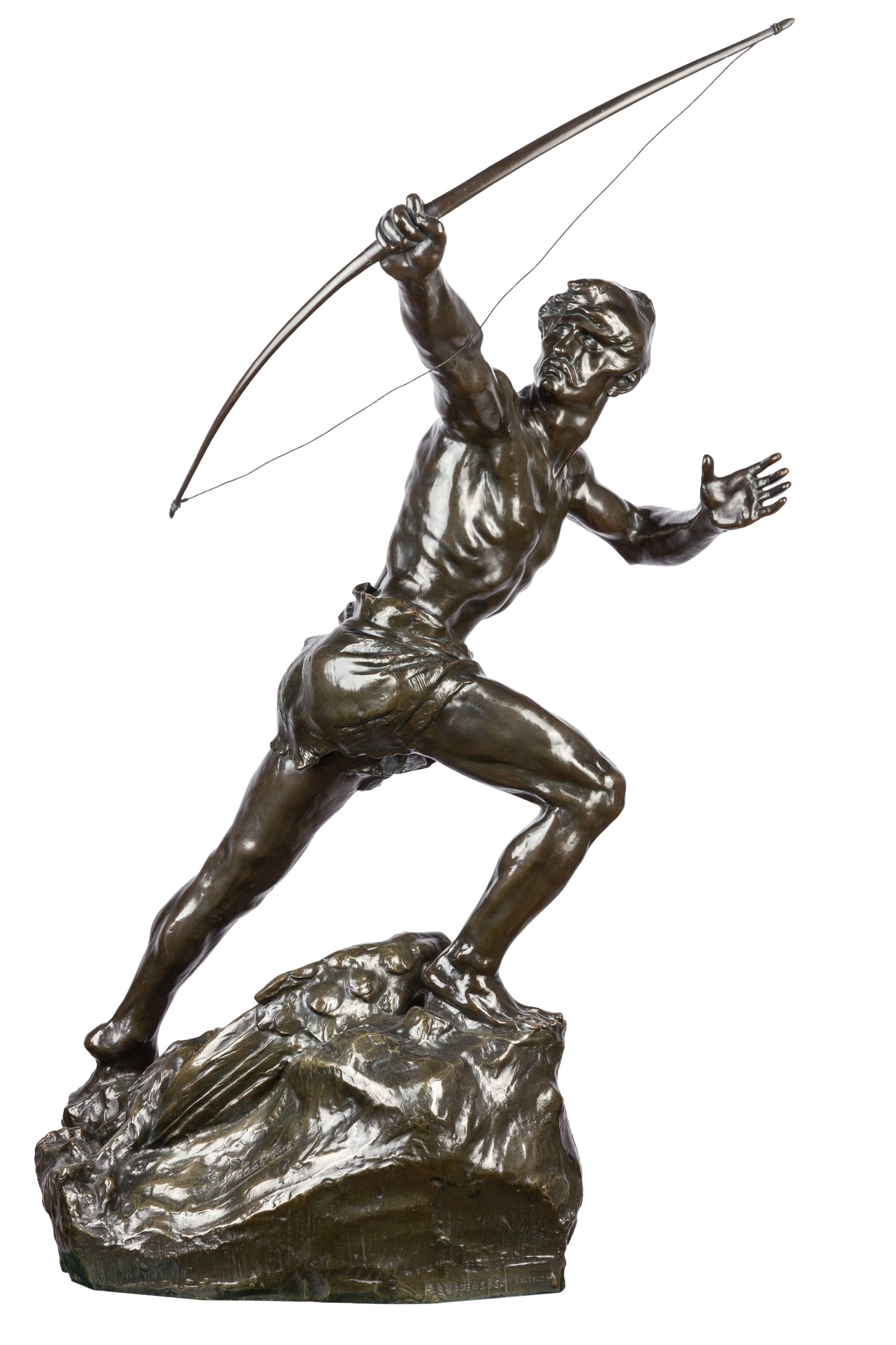 The  sculpture of a muscular, demi-nude man armed with a bow and arrow is full of energy and dynamism. Eyes firmly fixed on his quarry; the hunter has just released his next shot; at his feet lies a felled eagle. The sculpture exhibits a beautiful dark brown patina, the sand casting is of high quality. 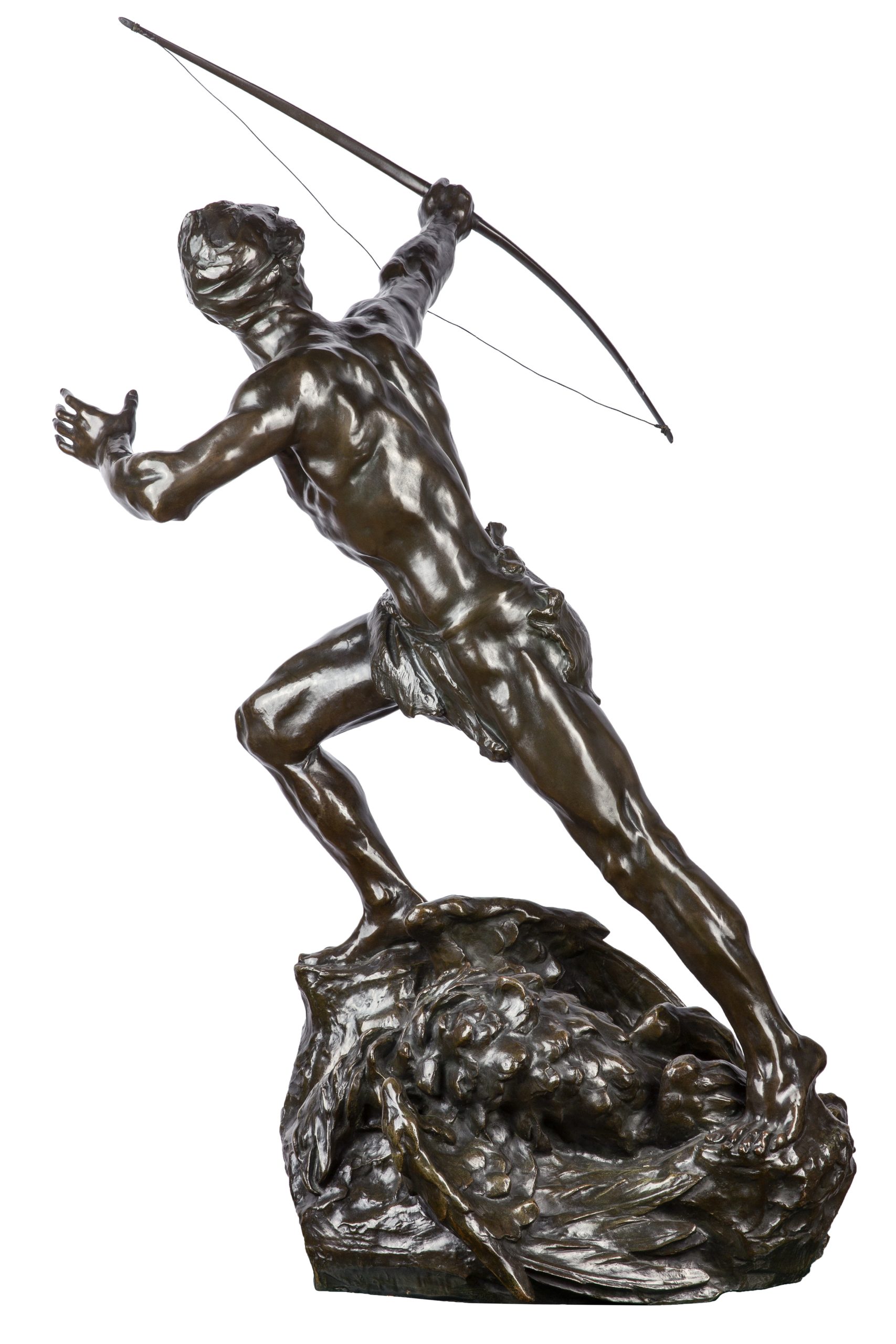 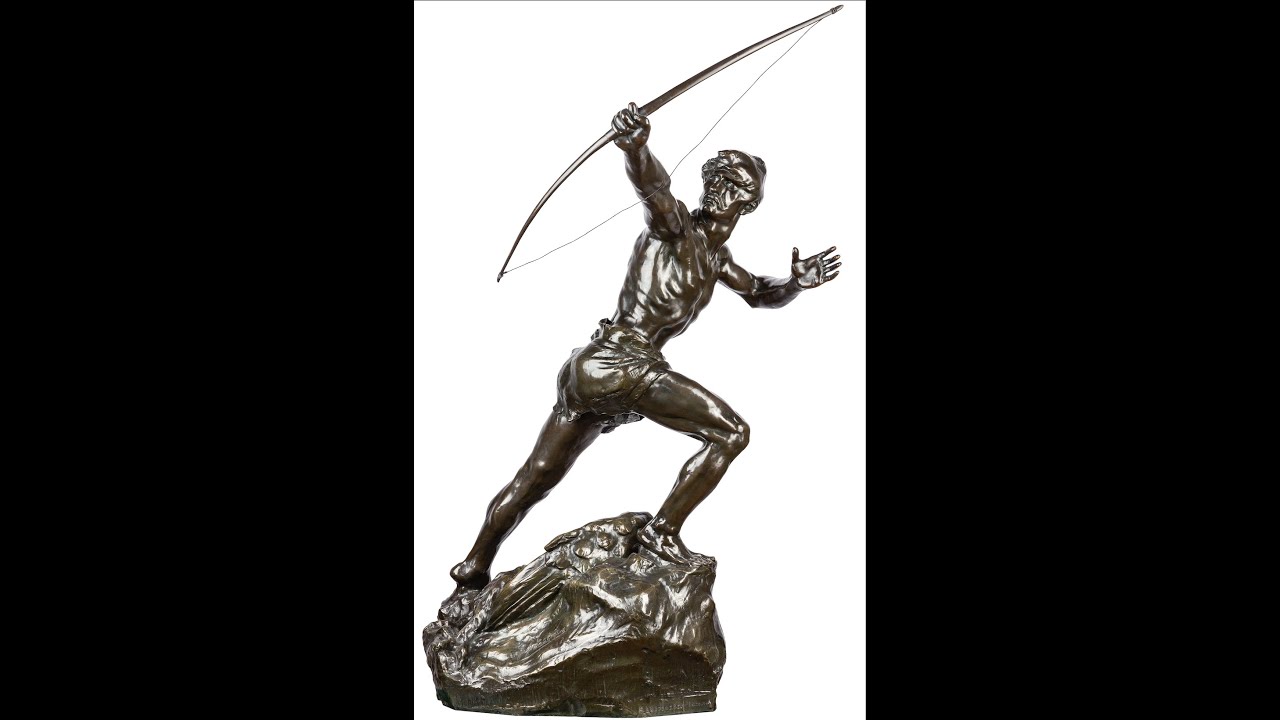 Jef Lambeaux’s  sculpture of a muscular, demi-nude man armed with a bow and arrow is full of energy and dynamism. Eyes firmly fixed on his quarry; the hunter has just released his next shot; at his feet lies a felled eagle. The sculpture exhibits a beautiful dark brown patina, the sand casting is of high quality.

Jef Lambeaux (1852 – 1908) is undoubtedly the most remarkable sculptor of the second half of the 19th century in Belgium. This man of uncommon energy built an enormous body of work that continues to inspire admiration and wonder. Originality in the broadest sense of the term is the first characteristic of his style. His lifestyle also assured him a unique place in the vibrant Belgian artistic milieu of the time. His solitary empathy, combined with pure singularity and a generous imagination, clearly distinguishes his works from those of his fellow sculptors. With an enthusiasm reminiscent of Rubens, Jordaens and certainly also Antoine Wiertz (1806-1865), Jef Lambeaux unwittingly created countless monumental sculptures that provoked a wide variety of reactions, both aesthetically and ethically.

His excellent craftsmanship has never been questioned. Bravery was central in his group scenes which were as dynamic as they were complex. Often larger than life, they included bronze battle scenes, wrestlers, boxers, heavy centaurs and kidnappings. Lambeaux was also well known for his monumental marble sculptures: Le Meurtre (The Murderer, 1905), L’Amour et l’Ivresse  (Love and Drunkenness, 1893) and of course his opus magnum, The Temple of Human Passions, a huge white marble bas-relief (8 x 12 metres!) worthy of Rodin, represents an unprecedented dramatic spectrum of human passions. Lambeaux’s work, of which there is not yet a complete inventory, can be estimated at more than 150 works.

His energetic lifestyle and successful career gave him access to the crème de la crème of the art world, enabling him not only to create titanic works, but also multiple representations of young women with light feet and expressive busts of men of character, preferably artists (Jacob Jordaens, Henri De Braekeleer, Frans Lamorinière, Hendrik Conscience, etc.). In Belgian museums – especially those in Brussels and Antwerp – astonishing examples of his work can be seen.

After his studies at the academy and his initial participation in exhibitions, the career of this exceptionally motivated artist only reached cruising speed at the age of thirty, when his now famous sculpture The Kiss was purchased by the Antwerp Museum (1882). Jef Lambeaux was unstoppable in his modelling of sculptures, large and small, commissioned and uncommissioned. All his works bear his trademark originality and high degree of daring. Thus his work and his personality acquired a great reputation, even during his lifetime. One only had to admire the spectacular Brabo Fountain (1887), just opposite the town hall of his home town, to understand his success.

In the « Almanach du Commerce et de l’Industrie Bruxelles et ses Faubourg » (Trade and Industry Agenda Brussels and its Faubourgs) from 1868 onwards as a publication of the Luppens foundry « Maison fondée en 1850 » (House founded in 1850) with its registered office Rue du Chêne number 20 in Brussels.

In 1875 the foundry was still located at 20 Rue du Chêne but opened a second establishment at 46-48 Boulevard Central (today called Boulevard Anspach).

In 1925, the factory located in Rue de Danemark 15 is in the name of the widow Luppens.