The Cradle of Love by charles-auguste fraikin 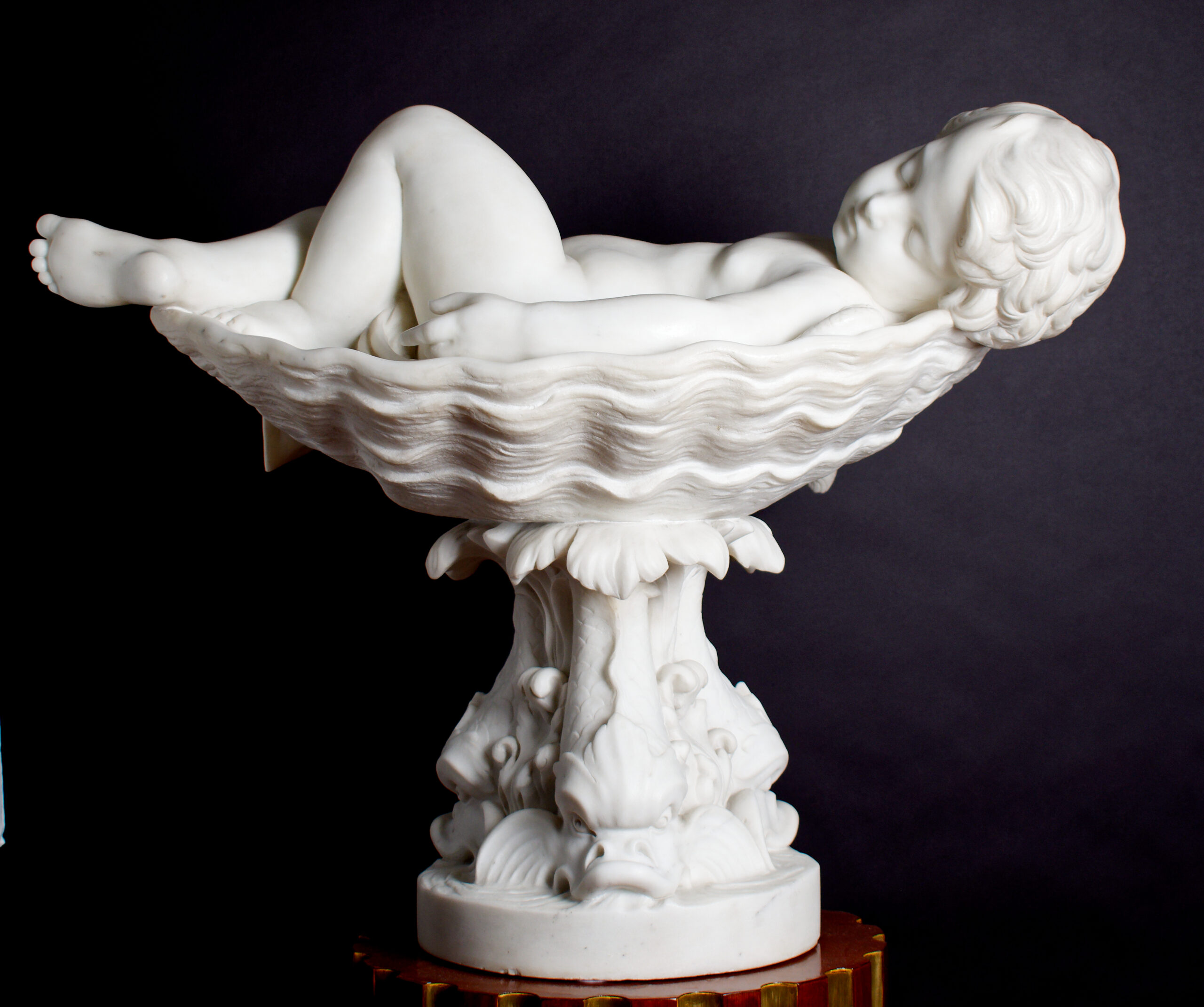 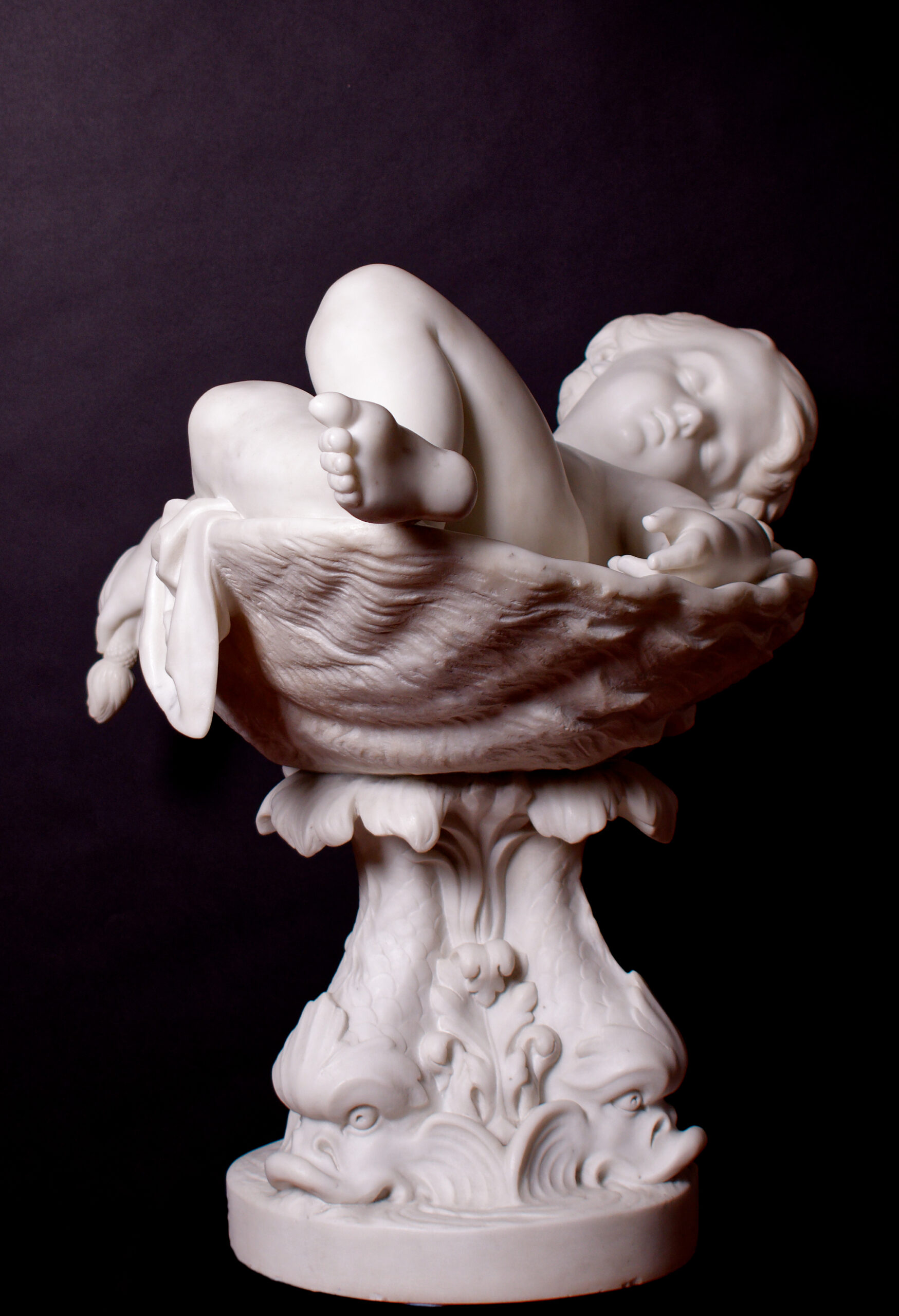 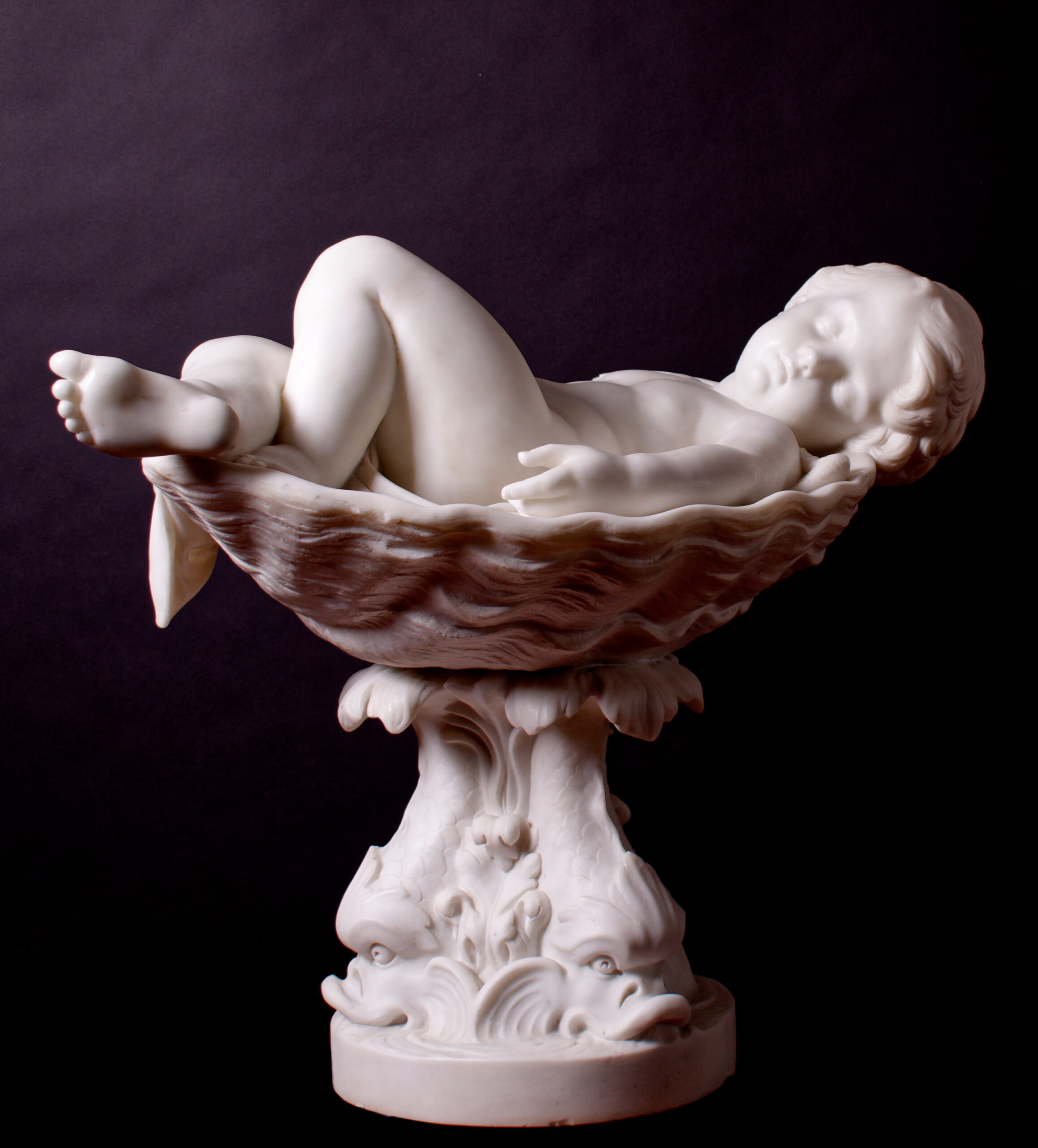 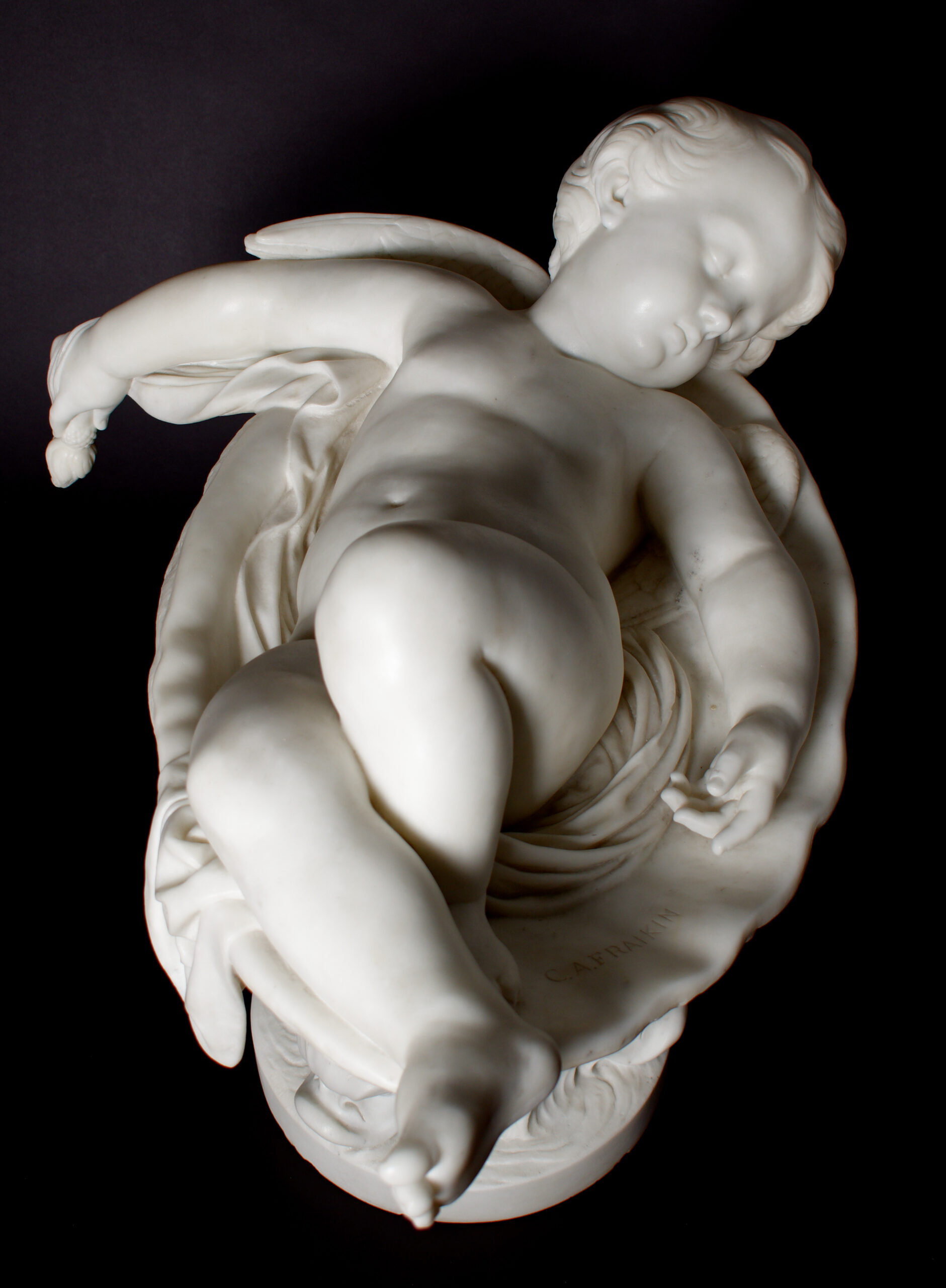 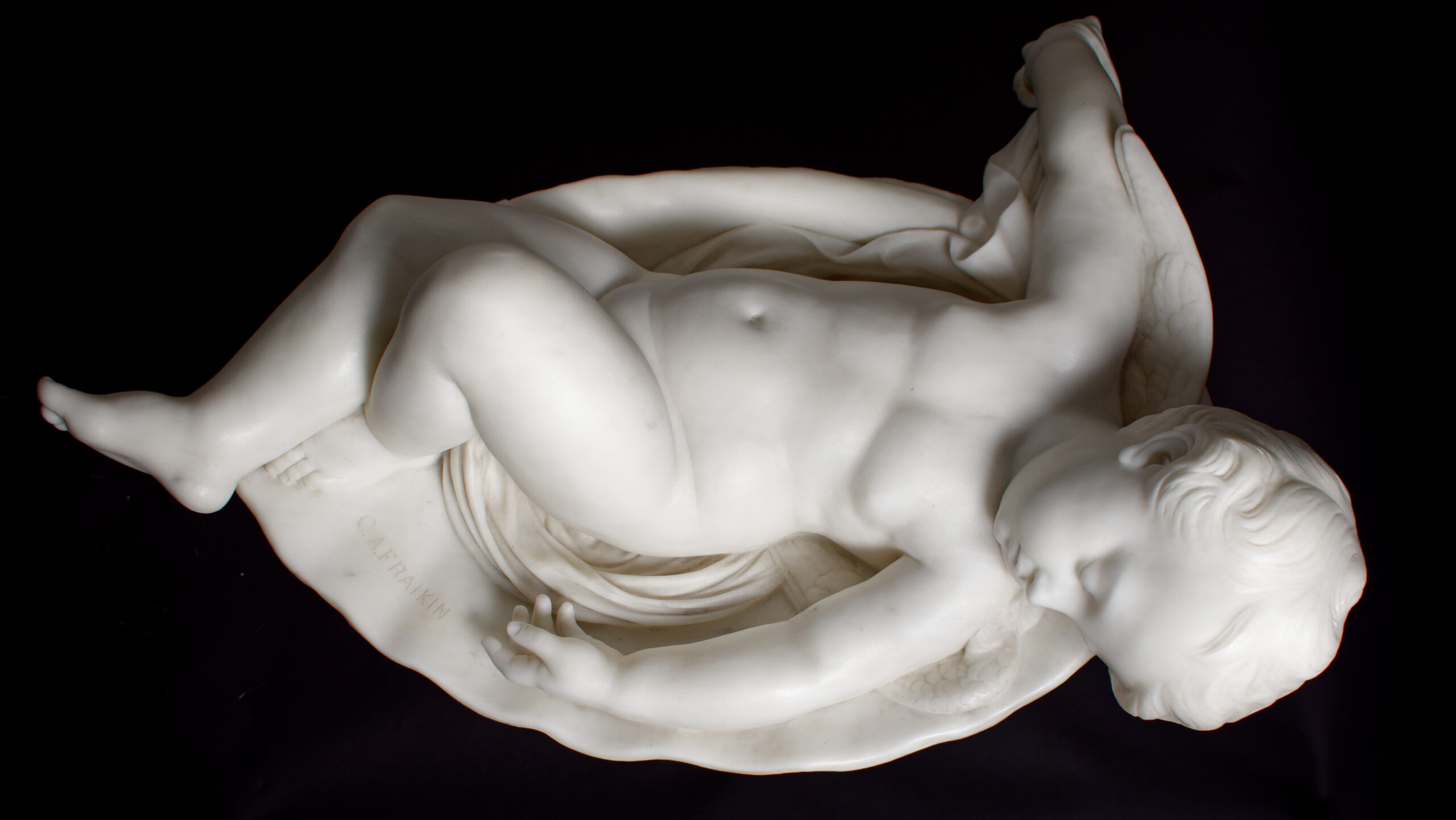 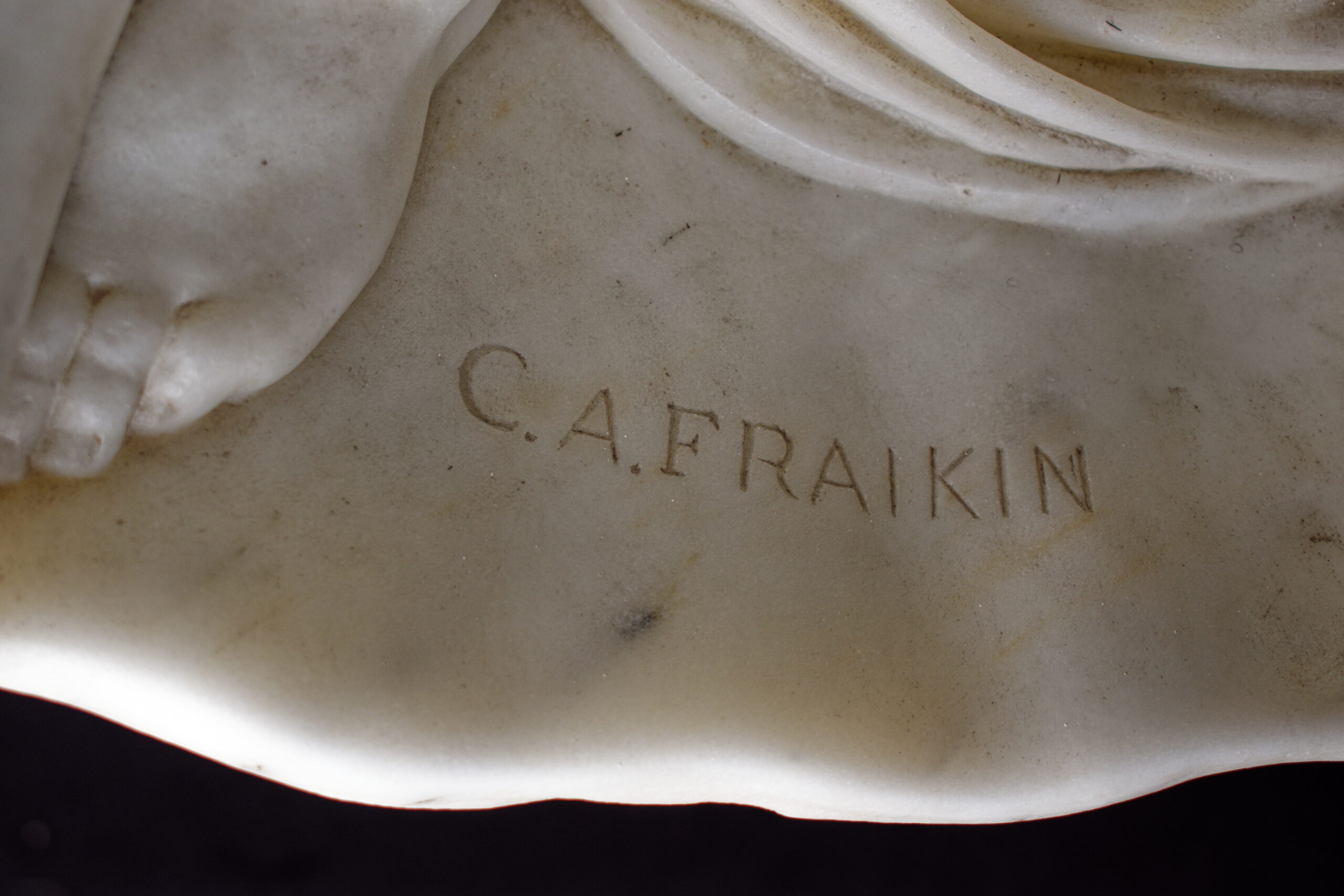 This rare sculpture in white Carrara marble by the famous Belgian sculptor Charles-Auguste Fraikin, depicts a cherub reclining in a giant clam shell resting on top of a column in the form of  three dolphins. The excellence of this work, from the gentle fall of drapery over the edge of the shell, to the delicacy of the wings and the facial expression of the cherub are outstanding. The intricacy of the column supporting the shell further testifies to the unparalleled talent of C-A Fraikin.

It is important to point out that this piece, in addition to being in a perfect state of conservation, is richly documented. Thus, we can say that three identical marble sculptures of this model were made, two of which still exist today.

The first of the three is the one we are presenting today. It was acquired in a lottery in 1850 by Doctor Lombard, a member of the Lièges medical circle. In all likelihood, this piece has never left Belgium. The second copy was acquired in 1853 by Baron Rothschild. The third sculpture was acquired by Empress Eugenie, wife of Napoleon III, at the World Exhibition of Paris in 1855. Destined for her rooms at the Tuileries, it was unfortunately destroyed in a fire 1871. We are delighted to be able to present an exceptional artwork deserving of royal favours.

Charles-Auguste Fraikin, born in Herentals on 14 June 1817 and died in Schaerbeek on 22 November 1893, was a great Belgian neoclassical sculptor.

Although he took some lessons in drawing as a boy in Antwerp (1829) and in painting in Brussels (1832), this immensely talented solicitor’s son had to become a pharmacist at a young age due to the family’s precarious financial situation following the death of his father. Fraikin worked for the pharmacist Van Tilborg and then for the King’s pharmacist Mr de Hemptinne. At the age of 18, he obtained his apothecary diploma with great distinction. However, Fraikin never lost sight of his passion for art and did everything in his power to become the artist he had always dreamt of being.

It was during his time as a pharmacist that he encountered the marble sculptures of artist Guillaume Geefs, which enchanted him such that he abandoned painting and drawing to take up the art of sculpture.

One year of practice later, he decided to join the atelier of Pieter Puyenbroeck (1804-1884) in order to enhance his practical skills (1836). Even before registering as a student of the Academy of Brussels, where he enjoyed further training (1840-1842), the ambitious Fraikin successfully debuted at the Salon of Brussels (1839) with a «Young Girl Picking Flowers».

Three years on, he submitted two sculptures which again enjoyed a very positive reception. After three more years of hard work and study, he was awarded a gold medal at the Brussels Salon of 1845 for his sculpture «Captured Love» that was purchased by the Brussels Royal Museum of Fine Arts in a life-sized marble version. A second version of this work is in the Hermitage, St. Petersburg. The resulting Royal interest led to various commissions, among them, portraits.

After a one-year study visit to Italy (1846), Fraikin’s career was in full swing. He was then twenty-nine years old and had become a member of the Royal Academy of Belgium. As he was participating regularly in the Belgian Salons, he was also entrusted with major government commissions: one of which was to sculpt eleven statues for the front facade of the Brussels Town Hall and a fountain commemorating the mayor, Nicolas-Jean Rouppe(1848). In 1850 he made the marble funerary monument to Queen Louise-Marie in the St. Peter and Paul Church in Ostend. Subsequent highlights include the Mérode monument in the St. Gudule Church in Brussels (1857); the bronze Freedom of Association group at the Congress Column there (1859); the famous figures of the executed counts of Egmond and Hoorne (1864), the galvano-plastic Father De Smet statue in Dendermonde (1872) that has now been rather ineptly replaced by a polyester version. In 1880, Fraikin’s seated marble figure of the astronomer Adolphe Quetelet (1796-1874) was placed in the sumptuous gardens of the Brussels Academies Palace.

In 1875, Fraikin was chosen by the Academy of Brussels, as its representative, to travel to Florence for the Michelangelo commemoration.  It is from this period onwards that Fraikin is considered an internationally recognised artist. His works were sent and reproduced in countries all over the world. There are even workshops in Florence and Carrara that exclusively made reproductions of Fraikin’s works in all sizes and materials.

Awarded every imaginable distinction and knighthood, in 1888 he donated a unique collection of 94 sculptures to his town of birth. He even laid out their presentation and wrote a catalogue for the occasion.

Charles-Auguste Fraikin held a speech on the occasion of the opening of his museum on 14 May 1893, summarising his life as an artist.

Born in a family of 9 children, passionate about art, overcoming all financial and family difficulties from an early age, with the ultimate goal of becoming the artist he always dreamed of being.

Among Fraikin’s achievements and distinctions were:

– a Member of the Belgian Academy of Sciences, Letters and Fine Arts.

– a corresponding member of the Institut de France.

– an active member of the University of Antwerp.

– an honorary member of the Royal and Imperial Academy of Vienna.

– an external member of the Trinity Society in Dallas, Texas.

– an active member of the Royal Commission for Monuments.

– amember of the Management Commission of the Royal Museums.

– a member of the Society of Science, Letters and Fine Arts of Antwerp.

– a corresponding member of the Artistic Institute of Ghent.

–  a corresponding member of the Antwerp Circle of Science, Letters and Fine Arts.

– an honorary member of the Cercle d’Art de Liège.

– a Commander of the Order of Leopold.

– a Commander of the Order of Christ of Portugal.

– a Knight of the Legion of Honour (France).

– a Knight of the Order of Merit of Saxony.

Fraikin also won numerous medals at the various exhibitions at which he exhibited his work. He received first class medals at exhibitions in Brussels, Paris, London, Vienna, Philadelphia, Melbourne, Port-Adelaide, as well as the great medal of honour at the Paris exhibition of 1845.

In the press of the time, the artist was already attracting the attention of respected art critics.

We can read in:

In addition to the many public monuments, many of Fraikin’s works are to this day in major museums and his mention in many books attests to the historical importance of the artist in the 19th century.