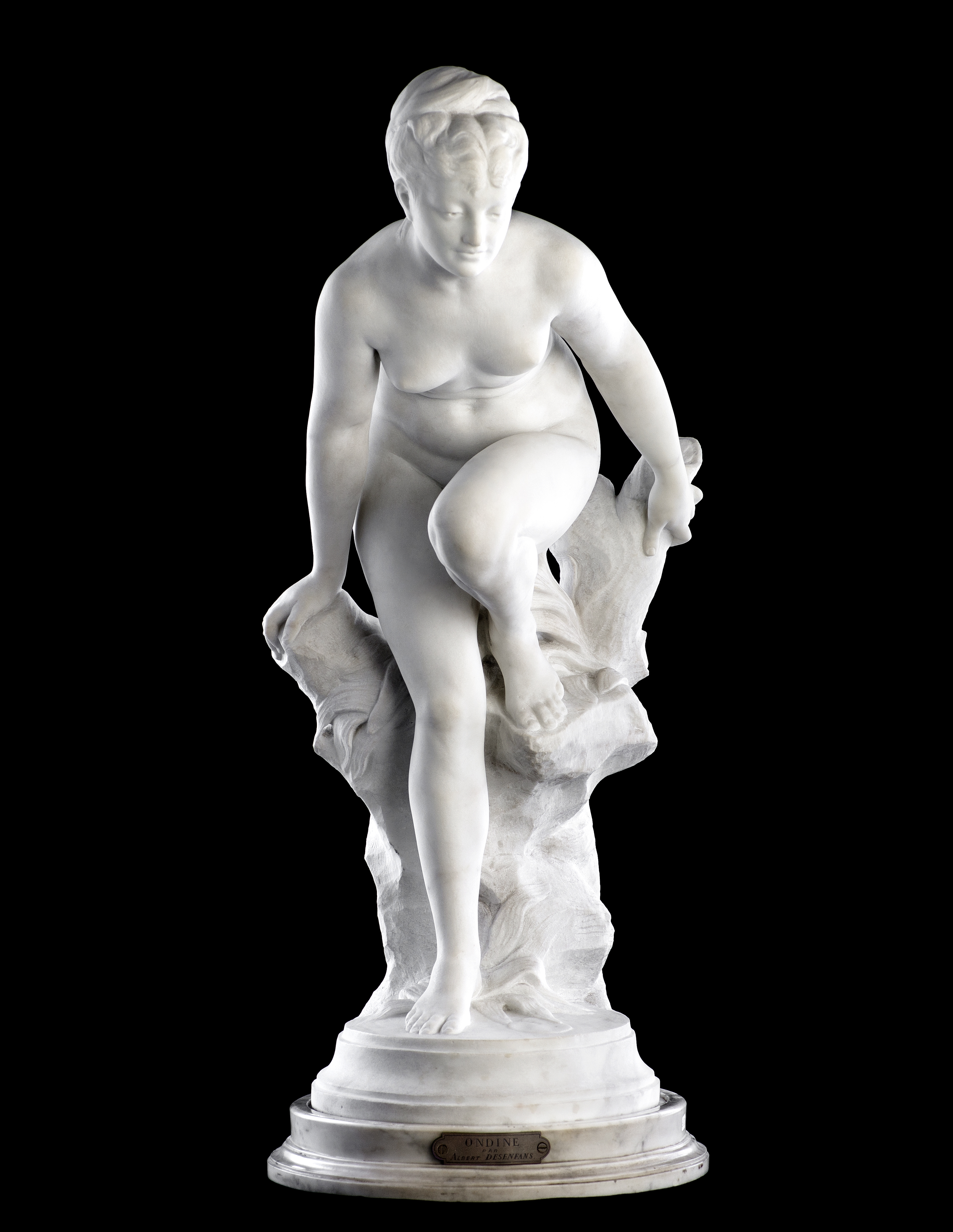 This sculpture dates from the end of the 19th century, circa 1890, and represents the nymph or naiad Ondine. Unlike mermaids, nymphs do not live in the sea; they frequent the running waters of rivers, waterfalls and fountains. On bright summer days, they like to sit on the edge of fountains and comb their long hair with golden or ivory combs. Those with golden hair are said to possess great treasures which are kept in beautiful submerged palaces.

It is said that the fountains are fed by the tears of the undines, which dry up as soon as a fairy feels offended. Thus, it is customary to leave various offerings near the fountains to appease the water fairies, such as flower garlands, pins or bottle shards, which glitter and shimmer in the water.

An identical and equally exquisite nymph sculpture also exists in bronze, exhibiting Desenfans’ phenomenal anatomical skill. The figure of Ondine is extraordinarily true to life, while at the same time displaying an originality of imagination in marble. The suppleness of her body as she leans towards the trusted element of water, the serenity of her facial expression and the manner in which the hands, the knee and feet coordinate, lend this sculpture a particular grace.

The Belgian sculptor Albert Desenfans (1845 – 1938) studied at the Brussels Academy with professor Louis Jéhotte and Eugène Simonis where he received the training that would enable him to build a brilliant career. Desenfans was an independent sculptor who regularly showed his work at countless Belgian and international Salons. He is mostly known for his religious, allegorical and mythological works. Desenfans produced large sculptures on commission for public buildings such as the City Hall, the King’s House, the Palace of Justice in Brussels and the House of the Province of Liège.

Desenfans’ smaller sculptures, executed in a variety of materials (stone, marble, plaster and ivory), demonstrate his expertise, stylistic feeling and respect for realism. This skill led to a remarkable degree of verisimilitude, the foremost trademark of his art. Desenfans’ fame is best demonstrated by his bronze statue of the stately General Chazal with a watchful lion at his feet.